China's 'Lehman' Moment? What an Evergrande Default Means for the U.S. Economy

The latest issue of the Marsh & Partners monthly newsletter, which anyone interested in real estate, finance, or economics should read - subscribe to our newsletter if you aren't already.

Since the news about Evergrande's debt predicament hit the headlines, I've had several people reach out to me wondering what it means for them.

The corporate media does its best to sensationalize and stoke fear, so this month I offered my thoughts on the situation as objectively as I could:

Over the last few weeks, I've had a couple of people reach out about this Evergrande crisis. They're concerned about the possible global ramifications, how it might affect our domestic economic landscape, and what, if anything, they can do to prepare.

And in a world of "misinformation", it's not easy wading through the click-seeking, hyperbole-laden headlines to get the real story - so I wanted to offer my take on the situation.

In case you missed the recent news, Chinese real estate developer Evergrande is on the verge of bankruptcy.

Now, this isn't necessarily a new development - a 2020 change to Chinese finance regulations enacted restrictions on the amount and type of debt a company could hold - and the chickens are finally coming home to roost.

Evergrande is a global 500 company, meaning they're one of the 500 largest firms in the world by revenue. But their vision for growth was clouded by hubris, and the company chased record-breaking development projects, funding most of their deals with excessive debt, to the tune of over $300 billion.

And with all that debt comes interest payments. And because Chinese law precludes them from acquiring any more debt, they can't meet their cash flow obligations.

Beijing has responded by flooding the financial system with over $150 billion in liquidity to help stabilize the market, but it looks like the writing is on the wall for Evergrande. But the question is, will it have implications for us at home?

So, should we be concerned about an Evergrande default?

Very - but not why you may think.

Corporate journalists have been screeching about the impending catastrophe for weeks, jumping on the opportunity to sensationalize one of the U.S. government's favorite bugaboos and postulate as to how an Evergrande bankruptcy would shake the world economy.

They've even gone so far as to call it China's "Lehman moment." And it very well might be - 30% of China's GDP is driven by their real estate industry. But speculating that an Evergrande default will engender an economic fallout of a similar scale globally is premature.

The timing of the Evergrande news comes at a bad time for the U.S. economy. A lackluster August jobs report, surging COVID cases, and not-so-transitory inflation have investors on edge. Major stock indices were turbulent in September, and the Fed has even hinted they'll begin tapering asset purchases as early as November.

And if you turn the TV on, you'll see an endless stream of pundits opining that the financial system is too confusing for us laymen - financial systems are all interconnected. One default will cause a cascade of subsequent defaults because of the layers of derivates, countless counterparties, the practice of rehypothecation, and fractional reserve banking.

That's not to say an Evergrande default wouldn't be remarkable. Of course, it would, but expect most of the economic disruption to remain contained within China. And instead of looking at the crisis through the lens of the catalyst that will rock the foundation of the global economy, we should rather see it as a cautionary tale and draw parallels to our own situation.

For decades the Chinese government has used real estate to inflate its GDP numbers artificially. From major infrastructure and real estate investments in Africa to the development of ghost cities at home. The economic mobilization required to undertake such projects has been massive for the Chinese economy.

And at the same time, the Chinese central bank has done its best to devalue its currency. They've done to the Yuan in 25 years what the Federal Reserve has done to the U.S. dollar in the last 100 years. And for an economy already on tenuous footing, disruption to an industry that accounts for 30% of GDP could spell disaster.

But as we look domestically, in a not so ironic "anything you can do, I can do better" moment, the U.S. government has done its best to put us in a similarly precarious spot. Consumer spending accounts for 70% of the United States' total GDP - with real dollar figures that dwarf the world's next largest consumer market.

Inflation has reached alarming levels - 40% of all dollars in circulation were printed in 2020, and the end of U.S. dollar reserve status seems inevitable. And any sort of "economic recovery" we are experiencing is only being propped up by a bounce-back in retail sales and real personal consumption expenditures.

Average household credit card debt is rising, and government-mandated lockdowns depleted American's savings. But consumers still seem unwilling to change their spending habits, and the likelihood of a 4th round of stimulus checks seems doubtful.

So what happens when U.S. consumers reach their credit limit? At what point does an economy that relies so heavily on consumer spending come crumbling down?

Can the federal reserve continue to backfill the difference by printing trillions and flooding the market with cheap money? Sure - but that will only accelerate the U.S. dollar's devaluation.

But if the Fed does, in fact, begin tightening monetary policy, expect to see an adverse reaction in equity markets. And businesses that have fueled expansion activities through inexpensive debt will inevitably be forced to pull back. That, in turn, will impact employee wages, take-home pay (which is already fewer real dollars because of inflation), and the amount consumers can inject into the economy.

So, let's not make the mistake of looking at Evergrande through a vacuum. Let's instead see how China's economy responds and begin to make our own preparations.

If you're unsure about what that means or where to start, we should chat.

In the real estate business, we often fall into the trap of putting blinders on and existing in our own little echo chamber. Real estate is such a localized and sub-market-driven asset that we forget the macroeconomy plays an important role in property values, demand, and liquidity.

We can't control how a real estate development company on the other side of the globe will operate. Nor can we control how a government will respond to such a crisis. And we can't predict with certainty how a foreign economic shock will disrupt global and domestic markets.

What we can do is read the tea leaves. We can use history as our guide and position ourselves as strategically as possible to weather economic uncertainty.

That begins by creating parallel income streams. And by investing in assets that hedge against dollar devaluation.

We're bullish on real estate at Marsh & Partners and believe it's a powerful means through which to achieve financial freedom. If you're an investor or small business owner, our real estate consulting services can offer you the tools to get your real estate journey started. Why Do People Choose the Wrong Real Estate Agent?

Choosing the right commercial real estate agent can be daunting. As a property owner, you’re... Don't Expect Normal After the Vaccine's Arrival: How Workplace Strategy Will Change Forever 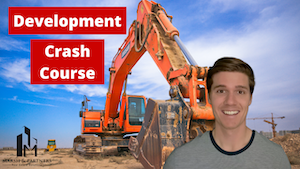